Roberto Firmino put in an impressive performance as Liverpool reached the quarter-finals of the League Cup thanks to a 1-0 win over Bournemouth at Anfield on Wednesday night.

The Brazilian showed glimpses of brilliance as Jurgen Klopp’s men secured their first victory under their new manager to set up a last-eight clash with Southampton at St Mary’s.

Firmino has struggled to make an impact since his big-money move from Hoffenheim during the summer transfer window and has missed a spell of games due to injury. 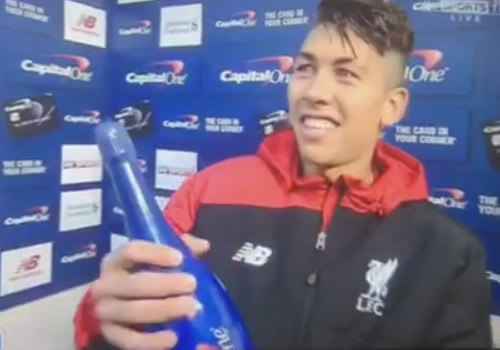 Roberto Firmino could not hide his delight at being handed a bottle of champagne after the gamePhoto: Sky Sports

But the 24-year-old is gradually getting used to life in England and looked genuinely thrilled to be handed a bottle of champagne after being named the man of the match in Liverpool’s win on Merseyside.

Firmino was handed the bottle by team-mate Nathaniel Clyne but proceeded to try and give it back to the interviewer at the end of the broadcast, only to show his sheer delight at being told he was able to keep it.

Jurgen Klopp: Why I was sure Liverpool starlets had quality to secure cup win