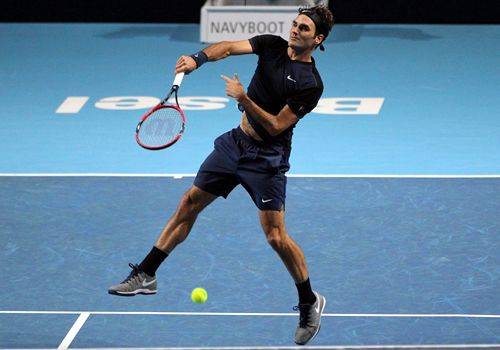 With six titles from 11 finals—currently up to nine finals in a row—and 15 appearances dating back to 1998, you might expect Roger Federer to feel particularly relaxed about playing on his home court in front of his devoted home crowd.

He has certainly looked the part of the cool, calm and collected Swiss as he plied his trade with media, sponsors, fans and more. But the tennis and the tournament are really no problem, as he explained ahead of this year’s Swiss Indoors.

“With experience, I am less nervous and anxious, I would say… the routines now are easier. In the beginning there was so much going on, it was crazy, but in a good way. I remember I was always very nervous on court because I wanted to do well here. But [having family], that didn’t change anything. It’s changed my life but not my approach towards the tournament.”

For these days, there is more going on in Federer’s life than just the tennis and the hoop-la that goes with it. The teenager who made his first appearance—and quick exit—against Andre Agassi is now a 34-year-old father of four: twin girls aged six and twin boys aged 18 months. So for the globetrotting Federers, with homes in both Zurich and Dubai, even returning to Basel is no easy matter.

He looked entirely relaxed in an interview with ATPWorldTour.com, as he contradicted: “I know how to handle it and cope with it, but it’s always busy, busy… I wish I could say [I was relaxed]—but no. I’m not the most relaxed here in Basel: There are so many things going on. I feel like I want to be everywhere but I can’t be, so I feel guilty to some extent. Not in a bad way, but it would be nice if the tournament was two to three weeks! It’s intense, it’s busy, but I love it.”

He has not been idle since making an unplanned early exit at the Shanghai Masters, either: “Rest or go back and attack? So I went back to the gym. What I needed was toughness, and my fitness coach was nice enough to fly into Dubai, we trained hard together and got ahead by the time I got to Switzerland. I’m in good shape and ready to go—just missing matches right now.”

That would soon be remedied. In a schedule of day-through-to-night quality that would test the most ardent tennis fans, the likes of last year’s Basel finalist and No8 seed David Goffin and popular German Philipp Kohlschreiber were relegated to St Jakobshalle’s second court, though with good reason.

A Rafael Nadal doubles match was followed by Grigor Dimitrov in a one-handed feast of a match against Sergiy Stakhovsky. And all that before home hero Federer made his way to court for the 66th time in pursuit of his 57th Basel win. 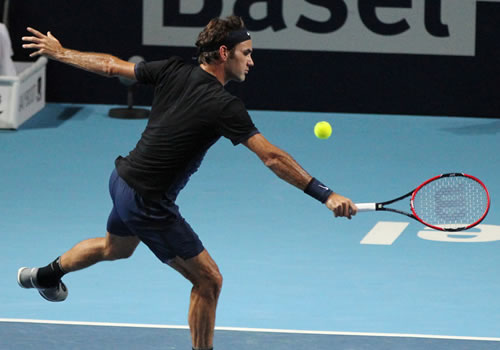 His match-readiness would be put to the test by the No64-ranked Mikhail Kukushkin, who put out fellow Swiss Stan Wawrinka in the first round last year.

It soon became clear that the test could be quite short and sweet, after the first set flashed by in 21 minutes. Federer opened with an ace, part of a love, and he then attacked the net on Kukushkin’s first point. It had the desired effect: the man from Kazakhstan was unnerved and broken.

Kukushkin did see break-back points in the third game, partly as a result of a double fault and a couple of wayward strikes from the Swiss. But he could not convert them, and Federer promptly broke his opponent to love. Kukushkin got one game on the board in the face of constant attacks from Federer but the defending champion served it out, 6-1.

Time again in the opening games of the second set, Kukushkin faced trouble, but held off the break until the fifth game, when the pressure brought the desired errors. In contrast, it was love holds from Federer, plus another break with his famed SABR move, and the match was done and dusted in 54 minutes, 6-2.

Federer was into press with just as much haste—already showered, changed and ready to head off for dinner: Great timing all round.

He did find a couple of things that he would have liked to do better: “Maybe could have been more efficient on break point chances [he converted just four from 13], but I tried a few things out there… Moved well, served well, got off to a good start, and once I got a lead I was able to pressure my opponent.”

And what of that wish to get more matches? Was 54 minutes enough?

“I mean, in practice I must also have played over 10 sets in the last few days. I know that’s not the same as matches, but at the same time it does give me a lot of information, and what I was trying to do in practice seems to be working, and today I got the confirmation.

“But the next day is going to be a bigger challenge, a different challenge against Kohlschreiber—he’s got different weapons—but this was positive tennis. I tried to stay aggressive and that’s always harder to do—it’s always easier to go back and be passive, though I have that option as well.”

Federer has beaten Kohlschreiber, who came through a very tough opener in three sets against Jerzy Janowicz, in all 10 previous matches. But Federer refused to be complacent about the talented, nimble German.

“It goes both ways, if you’ve beaten someone 10 times, you always feel like maybe next time it won’t happen anymore. Plus I have a lot of respect for Philipp. He trains really hard, has come to Switzerland and worked out with me, and, as you say, a good friend. He could have beaten me in Halle this year… [However] clearly having a record against a player is always helpful for confidence.”

With that, it was radio, TV and, his busy day done, he was off—no doubt to a familiar Basel haunt with familiar friends and family. A lot has changed since Federer first played at his home-town tournie, but not that.