Roger Federer is gearing up for the Shanghai Masters 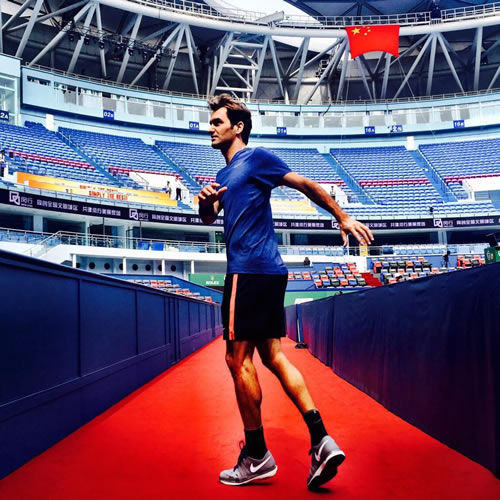 Roger Federer looked ready for action after touching down in China ahead of the Shanghai Masters.

The Swiss maestro has been drawn in the same half as Rafael Nadal and could face Jo-Wilfried Tsonga in the last 16.

Nadal, meanwhile, is in the same quadrant as Milos Raonic, Marin Cilic and Stan Wawrinka.

Federer used his personal Instagram account to share a picture of himself getting acquainted with his surroundings after arriving in Shanghai from Dubai on Friday night.

Federer shared the picture above on his Instagram account on Saturday afternoon and wrote: “Warming up at the Shanghai Rolex Masters 💪”

The 34-year-old also took to Twitter to reveal his excitement at being back in Shanghai ahead of the Masters tournament, where world No1 Novak Djokovic is the top seed.

Arrived in #Shanghai from Dubai. Wonderful to be back! 😍🇨🇳 pic.twitter.com/0TV2asW8h5

Shanghai will mark Federer’s first tournament since reaching the US Open final on 13 September, where he lost to Djokovic.