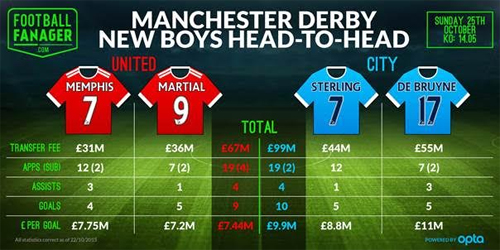 Anthony Martial has been the best big-money summer signing of either of the two Manchester clubs, according to stats from Football Fanager.

Ahead of this weekend’s derby, the leading daily fantasy football site has created an infographic which compares United duo Martial and Memphis Depay to Manchester City’s Raheem Sterling and Kevin De Bruyne.

All four joined their clubs in the summer but, as the statistics show, Martial is proving to be best value for money.

The former Monaco frontman has five goals and one assist from his nine appearances. While many questioned his sizeable transfer fee of £36m at the time, at £7.2m per goal, he represents the best value at this early stage.

Memphis was bought for £31m and, while he was dropped for the latest Champions League game in Moscow, has similarly impressive stats. The Dutchman has four goals and three assists from his 14 appearances. That equates to £7.75m per goal.

Sterling and De Bruyne, who commanded considerably higher transfer fees at £44m and £55m respectively, have made promising starts, but they’ll need to keep scoring if they are to make their signings as cost-effective as the United pair.

Belgian playmaker De Bruyne has cost £11m per goal but also has three assists to his name while ex-Liverpool man Sterling has cost £8.8m per goal.