John Terry, Eden Hazard and Diego Costa have been far from their best for Chelsea this season 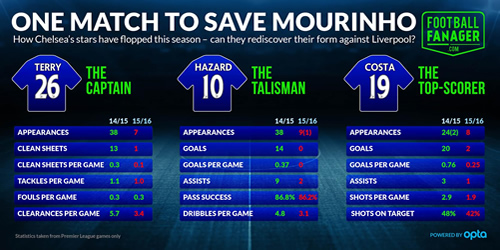 This does not make good reading for the Chelsea trio Photo: Football Fanager

Jose Mourinho reportedly has one game to save his job and, according to these statistics, he can lay the blame at the feet of key players John Terry, Eden Hazard and Diego Costa.

Fantasy football site Football Fanager have created an infographic that shows how the talismanic trio have declined in almost every significant area versus the 2014-15 season, from tackles and clearances in defence to goals and shot accuracy in attack.

Inspirational captain Terry played every minute of every Premier League game last season and his average of 5.7 clearances per game helped Chelsea record 13 clean sheets at a rate of 0.3 per game.

This term he has made just 3.4 clearances per game and the Blues have just one clean sheet, conceding 19 goals already in just their 10 games. In 2014-15, Chelsea conceded just 32 league goals all season.

The statistics don’t provide great reading for 2014-15 Premier League Player of the Year, Hazard, either. Last season, he scored 14 goals last season and made 4.8 dribbles per game. This term he is yet to find the net and has made just 3.1 dribbles per game.

Combative frontman Diego Costa was the champions’ top-scorer in the league last year with 20 at a rate of 0.76 per game. This year he has been far less prolific with just 2 goals, which equates to 0.25 per game.