Alexis Sanchez was unsurprisingly the star of the show once again as Arsenal ran out 3-0 winners at Watford on Saturday night.

The Chile international scored the Gunners’ first goal in the second half, before strikes from Olivier Giroud and Aaron Ramsey wrapped up the three points for Arsene Wenger’s men.

Sanchez continued his recent fine form with his 62nd-minute goal, meaning he has now scored six in his last three Premier League outings.

And the 26-year-old demonstrated just how confident he’s feeling by scoring an absolutely sublime goal in the warm-up to Saturday’s clash, captured by a fan at the game. 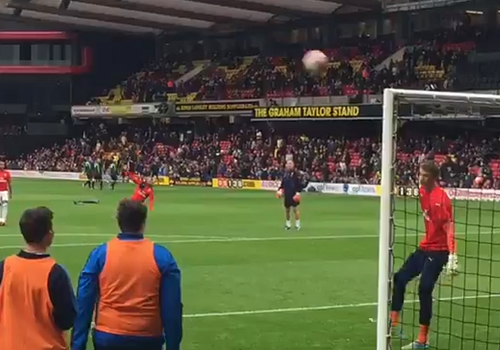 The Gunners moved back into second place in the Premier League table on Saturday evening to build on their victory over Manchester United before the international break.

Arsenal could move top of the table next Saturday – temporarily at least – if they manage to beat Everton in the top flight, before Manchester City travel to Manchester United on Sunday.