The redevelopment of Liverpool's Main Stand at Anfield is taking shape nicely...

Liverpool have released a time-lapse film capturing Anfield’s transformation since work began on the redevelopment of the Main Stand.

The footage shows how the expansion has taken shape since construction work got under way in January 2015 and includes key moments such as the lifting of the new 650 tonne roof truss and the installation of the first concrete sections of the new upper tier.

Towering high above the existing stadium, the redeveloped Main Stand is set to comprise three tiers, adding around 8,500 seats and taking the overall capacity of Anfield to around 54,000. 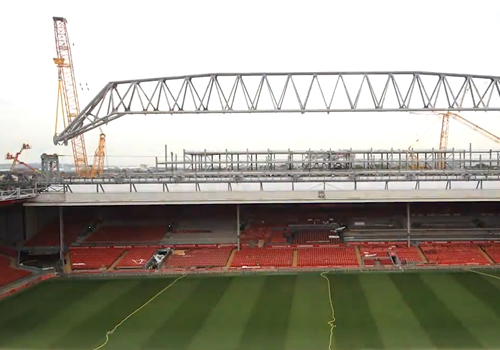 The new stand is due for completion during the 2016-17 season Photo: LFC TV

The redevelopment will also increase hospitality, conferencing and events facilities, as well as increasing branding opportunities for the Merseyside club’s partners.

With more than 3,000 tonnes of steel already erected at Anfield, the Main Stand expansion project is on schedule for completion during the 2016-17 season – creating one of the largest single stands in European football.

Liverpool host Bournemouth at Anfield in the fourth round of the League Cup on Wednesday night.