Jurgen Klopp has been getting used to his new surroundings at Liverpool after being appointed as the club’s new manager last week.

And the German coach looked in very high spirits as he was shown around Anfield for the first time since being appointed as Reds boss.

Klopp signed a three-year deal with the Merseyside outift to take over from Brendan Rodgers after the Northern Irishman’s sacking earlier this month. 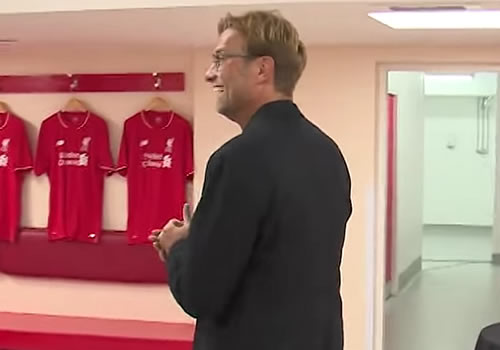 Jurgen Klopp beams as he arrives at Anfield Photo: LFCTV

The 48-year-old has been getting used to life on Merseyside in recent days, and the former Borussia Dortmund boss clearly could not hide his delight at seeing the Liverpool dressing room for the first time.

Klopp has been taking his first Liverpool training sessions this week as he gears up for his first taste of Premier League action.

The Reds take on Tottenham Hotspur on Saturday lunchtime looking to return to winning ways in the top flight after their 1-1 draw with Everton in their most recent outing.