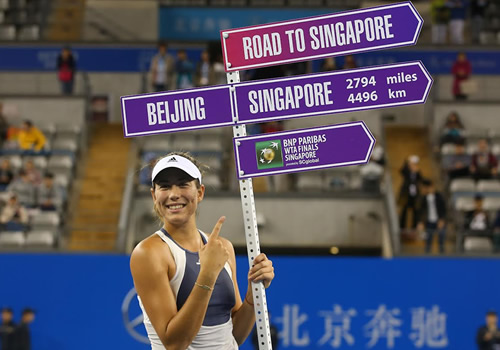 Garbine Muguruza will compete at the WTA Finals in Singapore Photo: WTA

It’s been some year for one of the biggest new talents on the women’s tennis stage, Garbine Muguruza.

The tall, elegant woman from Barcelona had already enjoyed a breakout season in 2014: She began with her first senior title in Hobart, where she came through qualifying to amass eight match-wins, reached the quarters at Roland Garros, where she beat Serena Williams in the second round, and ended the year with a semi run at the WTA Tournament of Champions in Sofia. Not bad for someone who missed the entire second half of 2013 after ankle surgery.

So she began this year on the cusp of the top 20, but when Muguruza arrived at Wimbledon, she still ranked at 20 and had won only a single match at the tournament before. She was not, she said, a great fan of grass, and that was borne out by two early losses at the Wimbledon warm-up events in Birmingham and Eastbourne.

Clay? Well she had reached the quarter-finals at Roland Garros again. Hard courts? Well they were still producing the best results from her big aggressive game. Her first wild card into a WTA tour event at the Miami Premier in 2012, as an 18-year-old, saw her beat two seeds to reach the fourth round. The next year, she did the same at both Indian Wells and Miami, and last year brought that Hobart title.

But come Wimbledon, she powered and charmed her way through seeds with class: former semi-finalist Angelique Kerber, former world No1 Caroline Wozniacki, French Open semi-finalist Timea Bascinszky, before beating the grass craft of former Wimbledon finalist Agnieszka Radwanska. Here she was, then, in her first Grand Slam final, and while she lost a tough match to Williams, it launched her into the seedings for the US Open Series, beginning at No9 in Toronto.

Perhaps because of the weight of expectation, perhaps due to the physical stresses of an intense first seven months, Muguruza struggled to make wins on the hard courts of North America. However at the Wuhan Premier last week, she was back—though forced to retire in the final against Venus Williams.

Had she won the title there, she would have confirmed her place at the WTA Finals: as it turned out, she would save the big day for her big day. Muguruza turned 22 on the day of her third-round victory at the China Open over Mirjana Lucic-Baroni, and became the fourth woman to qualify for Singapore. [With Serena Williams withdrawing from the WTA Finals, however, Muguruza is, in practice, third on the leader-board.]

Not that this is the first time Muguruza has qualified for Singapore, for the rangy Spaniard is a fine doubles players too, with fellow Spaniard Carla Suarez Navarro, and the duo made the doubles competition last year. They are, too, in eighth place on the doubles leader-board this year, having picked up the Birmingham and Tokyo doubles titles and reached the finals in Dubai and Madrid. And as it happens, Suarez Navarro is also in with a chance of singles qualification, though she lost ground to Radwanska in losing to Bascinszky in the Beijing third round.

Muguruza admitted after reaching her significant quarter-final: “I was so concentrated during the match, I really had all types of emotions. I wanted to win bad and it was tough. I’m really happy. Was a great gift today!”

She told the WTA website: “I’m very excited to have qualified for the WTA Finals in Singapore. This has been an exciting year for me. I have worked very hard this last month and I am really happy how it had paid off. Qualifying to Singapore is a great reward. I have great memories from Singapore last year playing doubles and this time I am looking forward to competing against the best singles players in the world.”

The road to Singapore

Race heats up as Nadal, Ferrer and Nishikori reach quarters but Berdych falls

Race heats up as Nadal, Ferrer and Nishikori reach quarters but Berdych falls