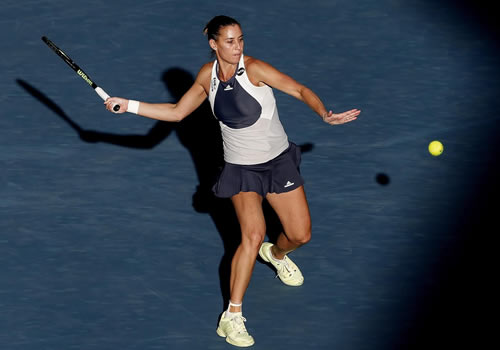 With the loss of French Open finalist Lucie Safarova to Anastasia Pavlyuchenkova in her first match in Moscow, followed by Karolina Pliskova to qualifier Anastasija Sevastova in the second round, two more of the eight slots in the Race to Singapore have been sealed.

Angelique Kerber, though absent from competition this week, became the sixth to qualify, and was quickly followed by Flavia Pennetta playing in her last—though what has now become her penultimate tournament—before she retires from tennis.

I had a great season and really pushed myself to qualify

It is Kerber’s third time to qualify for the WTA Finals, having already played in the women’s grand finale in 2012 and 2013. She was also the alternate last year, but has yet to advance out of the group stage.

She told the WTA: “I’m very happy to have qualified for the WTA Finals again. After being an alternate last year, I am excited to get back on the court and compete against the top players in the world again. I had a great season and really pushed myself to qualify.”

The popular left-handed German has won four Premier-level titles this year, all on different surfaces: Charleston on green clay, Stuttgart on red clay, Birmingham on grass, and Stanford on hard.

The 33-year-old Pennetta caps the best year of her long career that included her first Grand Slam title at the US Open and a career-high ranking that has taken her into a her first-ever WTA Finals qualification.

She said: “Qualifying for the WTA Finals is a dream come true and the perfect way to end to an amazing season for me. It will also be a wonderful way for me to say goodbye to tennis: It’s a spectacular stage to bow out on. Having won the WTA Finals before in doubles, I can’t wait to make my debut in singles.”

The eighth spot may not be confirmed until the conclusion of the Moscow event, which runs right up to the start of Singapore. Safarova is still at No8, an achievement in itself after injury and illness hit her during the US Open and kept her out of the entire Asian swing. However Carla Suarez Navarro, who is already in the Moscow quarters, could grab that No8 spot if she reaches the final.

The loser can still pick up an alternate place in Singapore, along with Timea Bacsinszky, who is top seed in Luxembourg this week.

In doubles, the final eight duos were set before this week’s tournaments got under way, but there has been a late change following the withdrawal of Ekaterina Makarova and Elena Vesnina. Their place is taken by Andrea Hlavackova and Lucie Hradecka as a result of the leg injury suffered by Makarova since the US Open.