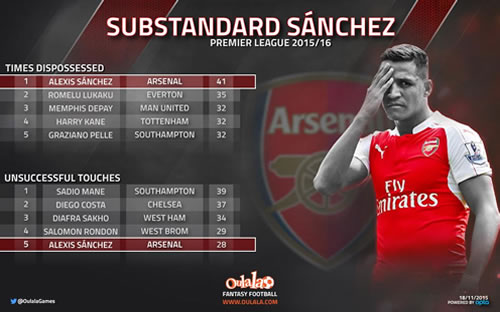 Alexis Sanchez has been dispossessed 41 times this season Photo: Oulala

Stats released by fantasy football game www.oulala.com back up rumours that Arsenal manager Arsene Wenger is ready to give Alexis Sanchez a mid-season break.

Oulala’s stats, sourced directly from partners Opta, show that the Chilean has been the poorest player in possession in the Premier League this season.

Of all players in the Premier League, Sanchez has been dispossessed the most times this term, a total of 41 occasions.

A further stat from Oulala reveals that Sanchez is ranked the fifth-worst player in the Premier League for unsuccessful touches.

The 26-year-old has registered 28 unsuccessful touches in his opening 12 league games for Arsenal. Only four players in the Premier League have recorded more. Southampton’s Sadio Mane has made 39, the most by any player. Diego Costa has made 37, Diafra Sakho 34 and Salomon Rondon 29.

Despite playing in this summer’s Copa America, helping Chile defeat Argentina in the final on 4 July, Sanchez featured in Arsenal’s opening game of the Premier League season against West Ham. The 26-year-old has gone on to play 17 games in all competitions for his club this season.

Sanchez returns to Arsenal having also played a full 180 minutes during the international break for Chile in World Cup qualifiers against Columbia and Uruguay.

Is Wenger ready to give the forward a much needed rest before he inevitably suffers from burnout?

The stats certainly suggest so…