Cristiano Ronaldo film: ‘Since I was a child, I always felt special’

Cristiano Ronaldo faced the media in London on Monday morning to mark the release of his film RONALDO. Here's what he had to say... 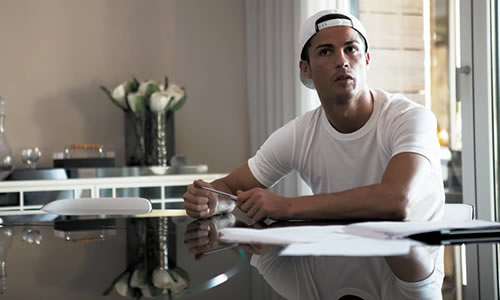 RONALDO is in cinemas for one night only on 9 November Photo: Universal

How did Universal persuade you to take part in a documentary?

At the beginning it was fun, interesting. I spoke with my team and they explained that Universal are interested in doing a movie with me and I just started to smile because I didn’t expect it. When I met these guys [the directors] I felt a very good chemistry because they are good and know how to deal with people. It was strange but fun at the same time. They explained what they were looking for and I was interested because my team explained it to me well. I just tried to enjoy myself since the beginning, it was cool and I enjoyed it a lot.

Cristiano, you’re one of the most famous men in the world, your filmed every day, but this was a very different way of filming. How long did it take you to trust the directors and how different was the filming process?

In the beginning it was a little bit strange to be honest because in my entire life I’ve never put people in my house that I really don’t know… well, sometimes (smiles). But I just feel comfortable with these guys. I am a person that feels energy, vibes and when it’s good people you feel straight away. I felt good chemistry. The things in the movie are natural – I’m myself, I’m not an actor and I don’t know how to be an actor. This is why I say the movie is great because it’s myself. The people who really know me are not going to be surprised. This documentary is going to show them what I am inside the house with my family, my friends, my son. I think it will be interesting – sad moments, happy moments, funny moments. I think at the end of the day, the result is unbelievable. I think especially the fans are going to love it.

There’s some interesting footage of you as a child playing for Sporting Lisbon in the film, did you know it existed?

I knew about it one year ago. To be honest, since the beginning when I was a child, a young boy, I always felt special sometimes. Not just for myself, but I saw people look at me with different eyes because in my opinion I think I was different from the other ones. It’s not like now, because the dimension is completely different and it’s huge right now. But in the beginning I was feeling that – the follow of when I was a kid until now. I feel very comfortable with the cameras, with the media. Sometimes I’m not the best guy in the world but I try to be myself. We have to be ourselves, so I just feel comfortable. For me, it’s not a big deal, it’s just one step more in my life and it’s great – I feel so happy in this moment.

When you watch this film back what moment do you most enjoy seeing up on the big screen and which to you find the most challenging?

Many parts of the movie, I feel like ‘wow, great, unbelievable images, intense parts’. The parts that I feel more is not my part, it’s my brother and mum’s parts. These are the parts I feel are more intense in the movie. But my parts are cool too, especially when I was with Cristiano (his son).

It’s noticeable how alone you look, I was wondering why your girlfriend at the time Irina Shayk doesn’t appear in the film?

This is a very clever question. Life has parts – good parts, bad parts, parts that you are involved. The director said that they didn’t see a strong part to put in the movie.

For a guy with a public image like yours, do you feel like you have exposed too much in this film?

Maybe, maybe. But I just have fun. I enjoyed myself, I don’t regret anything that I did with these guys. I feel unbelievable. When you do something, of course people are going to try to find ways to criticise you – why you did this, why you did that… But it’s normal, I’m 15 years in the sport – people criticise me, people speak good about me. I just have fun – the main word is that I enjoyed doing this movie.

A lot of the film is based around you and your Ballon d’Or wins. Does it now anger you that some of the greatest moments in your career collecting the Ballon d’Or were pictured with Sepp Blatter, who is now a suspected criminal and who would you want as the Fifa president and what should the future of Fifa as a player look like?

A very good question. The Ballon d’Or gala was in the movie because I think it’s a very important part – the feelings, the environment around this trophy. I think it was cool to give special moments in the movie. Of course, I’m not going to speak about the president because when Cristiano says something it creates a huge statement. I’m not going to be involved in these kind of problems. I have to speak about the movie, my first movie. What do you expect me to say? I’m so happy, of course I’m a bit sad because of the [Real Madrid] result yesterday. But I don’t want to put yesterday in this day, because it’s such a special day for me. It is one of the most important days in my life, to do a movie is great. Not every player has the opportunity to do a movie with these guys. I think I have to be proud and have to appreciate these moments. I just feel happy, I want to enjoy the day. I have my friends and family here. I just want to enjoy my day, that’s it.

RONALDO is in cinemas for one night only on 9 November, and also available on DVD, BD and Digital download the same day.