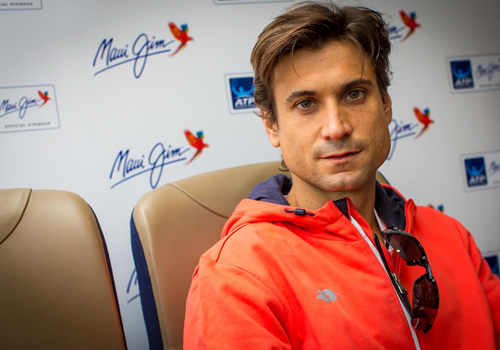 David Ferrer, one of tennis’s most consistently high-achieving players, as well as one of its most respected, passed two new milestones in a single match earlier this year at Roland Garros.

Playing in his 13th French Open, the world No7 embarked on his 50th consecutive Grand Slam—third among active players behind Roger Federer and Feliciano Lopez—and won his 300th match on clay—second only to Rafael Nadal.

That day, the 33-year-year old Spaniard came and went almost in the blink of an eye, just 82 minutes, bustling to victory in his own workmanlike fashion: head down, oblivious to all but the job in hand, and serving out with an aggressive serve and net-rushing finish.

Not that the modest Ferrer wanted to make big deal of it: That is not his way: “Well, is not important. It’s just a number. But of course, it’s a lot of matches playing on clay courts, and nothing else [but] pride for that point.”

He would go all the way to the quarters for the sixth time, at the Major where he also reached the final in 2013—a rare achievement among the giants of the current era.

Indeed the quietly-spoken Spaniard is also one of a very small band that has denied the ‘big four’ of Federer, Nadal, Novak Djokovic and Andy Murray a Masters title, in Paris-Bercy in 2012. He has, it so happens, also reached the final of six different Masters in three different environments.

Small of stature, but with the work ethic of Hercules, Ferrer has not been outside the top eight for over five years—and for most of that time he hasto barely slipped from the top five—but this year, something very unusual happened.

After another fine start to his season, already a 33-7 run and three titles before Roland Garros, he drifted down the rankings to No10, courtesy of an equally rare occurrence: a Ferrer injury. He lost his only grass-court match at Queen’s, withdrew from Wimbledon with an elbow injury, and did not play again until the US Open, where he lost in the third round.

On a damp, blustery day on the Players’ Launch that headed down a grey Thames to The O2, he recalled, with some bemusement but also some pleasure, his extended period away from the tennis tour.

“It was a significant experience. I have never been one month injured, and this year I was two months… so I became more patient. I tried to be with my family [back home in Spain], and with my close friends. It was a good experience.

“I tried to do different things. Of course I preferred never to have an important injury but now, at the end of the season, the last four tournaments, I am with energy, and not tired. This time of the season I was always tired.”

A silver lining, perhaps, as Ferrer prepares to take part in his seventh World Tour Finals. He reached the final in his very first appearance in 2007, but for the last three years he has lost at the round-robin stage—last year as a late-substitute No9.

He is, at 33, not the oldest among the eight—that accolade goes to Federer—but I wanted to know if he was as often challenged about a retirement date as the Swiss. His reply matched all the zest and enthusiasm of Federer: Ferrer is, there can be no doubt, loving his tennis as much as ever.

“I have the same motivation as when I was younger. And I enjoy playing tennis more than when I was younger: Really! I like to be playing with the best players in the world. My goal is to be top 10, but most important is that I am still playing tennis. When I finish enjoying it, I will not have the motivation to be a good tennis player and I will stop. I am 33, and I hope I still play at least two more years.”

That goal, top 10, seems a modest one in the context of what he has done, and continues to do, against all-comers—all, of course, except the ‘big four’: He has never beaten Federer, has not beaten Djokovic since 2011, and has losing records against the two men in his pool this week, Murray and Nadal. But those four are both his benchmark and his spur to improvement: “I have to word hard to be there.

“I know the big four are another level. They are better, they have won everything in the last seven or eight years, and I know it’s very difficult to be with them. But my goal is to be top 10, and improve my game. Because seeing them has been good for me. Playing tennis with them… I am a better player because they are there.” 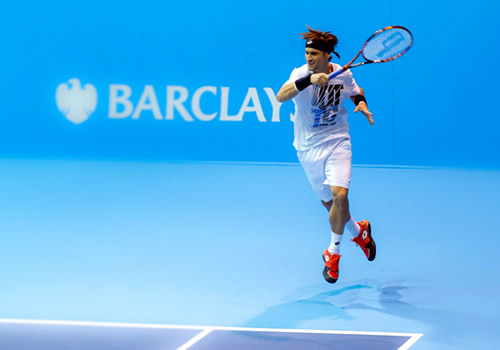 And he knows he has to keep improving to live with what seems to be an ever-rising standard among the elite. Was he, as Richard Gasquet admitted in Basel, trying to become more aggressive, more forward-moving on the court?

“Sure, I try to improve my game every year. This year, I try to improve my slice and finish points at the net. Now there are a lot of bigger tennis players, and I need to play more aggressive. And I am 33 years old! I am trying to shorten points, that’s very important. I like playing on hard courts and faster courts, because the points are shorter.”

And that despite his early experience and success coming on clay?

“Yes, I prefer hard courts to clay. My best results were on hard courts. Yes, I did finally get to [the final at Roland Garros], but I won more tournaments on hard courts. I was born on clay courts, I grew up playing on clay courts. For me and Spanish players, it was easier. But I am playing flat on my backhand and forehand, so that adaptation to hard courts was not difficult.”

His return to match-winning form since that summer injury does rather prove the point: Two Davis Cup wins indoors, the Kuala Lumpur and Vienna titles, both indoors, and the semis of the Paris Masters.

He is up to 55 match-wins, even with that two-month break, though that is nothing compared with his energy-sapping 2012, when he won not just the Paris Masters but six other trophies with a tour-leading 76 match-wins—and went on to win both his rubbers in Spain’s losing final Davis Cup tie.

Maybe, then, despite the evidence of history and rankings—and the third man in his pool, No4 Stan Wawrinka, has also won their last three matches—the nimble Ferrer can pummel his way beyond the round-robins in London.

His fellow players will not breath easy with him on the other side of the net, that’s for sure—few men command the admiration of his peers more than Ferrer does. And one more thing is certain: He will leave every ounce of effort and every drop of sweat behind him at the O2—and not for the first time, an arena full of respect.

David Ferrer is an ambassador for premium Hawaiian polarized sunglasses brand Maui Jim, who are an Official Supplier of the ATP World Tour. Invented more than 30 years ago to combat the harsh rays of the Hawaiian sun, all Maui Jim sunglasses cut 100 per cent of harmful UV rays and 99.9 per cent of glare from above, below and behind each lens.

He plays his first match against Andy Murray at 2pm on Monday 16 November.