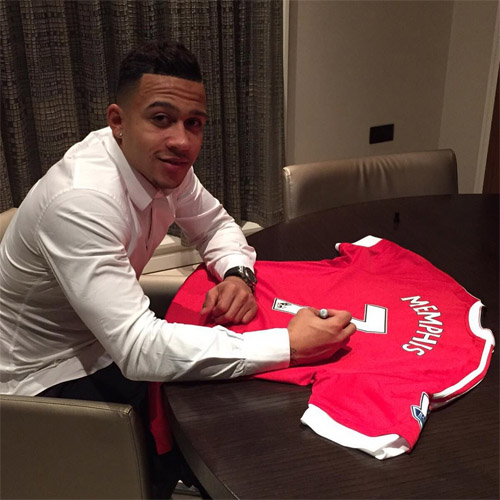 Memphis Depay says he is humbled that his Manchester United shirt is the third best-selling in the world.

The Red Devils winger proved a hit with the United supporters in the summer after he made a £25m move to Old Trafford from Eredivisie champions PSV Eindhoven in May.

However, Memphis has struggled to replicate his PSV form in United’s famous number seven shirt which has previously been worn by greats like Cristiano Ronaldo, David Beckham, George Best and Eric Cantona.

The Dutch winger posted the above snap on his Instagram page and wrote the following caption: “Extremely humbled by the fact that my jersey is the #3 best selling in the world. Going to do something special for all my wonderful fans out there. Stay tuned!”

Memphis was unable to find the net against his former employers on Wednesday night as United played out a goalless draw with PSV Eindhoven at Old Trafford.

The 22-year-old forward scored his first Champions League goal for the Red Devils in a 2-1 defeat by PSV in Holland in their opening group-stage game.