Photo: Marcos Rojo all smiles with Man United duo on way to London 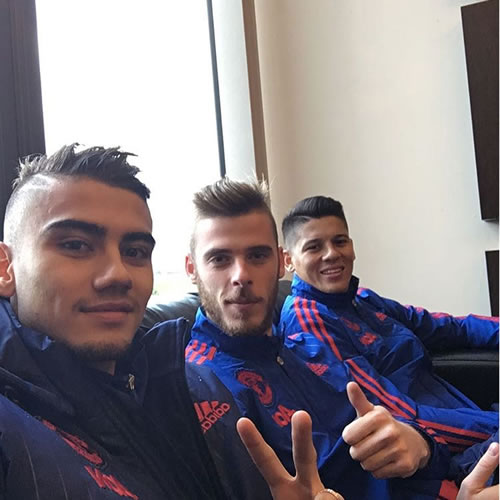 Marcos Rojo looked to be in good spirits as he posed for a selfie with Andreas Pereira and David De Gea as Manchester United headed down to London ahead of their Premier League clash with Watford on Saturday lunchtime.

The Red Devils head into the game looking to build on their 2-0 victory over West Bromwich Albion at Old Trafford before the international break.

United will be without captain Wayne Rooney for the clash after the striker was ruled out of the game by manager Louis van Gaal as the England international recovers from illness.

Pereira posted the picture above on his personal Instagram account on Friday afternoon and wrote: “Heading to London , with the bross

United head into Saturday’s clash in fourth place in the Premier League table and two points behind leaders Manchester City after 12 games.

The Red Devils have not lost a Premier League game since their 3-0 loss at the hands of Arsenal back at the start of October.

Photos: Sanchez, Gabriel all smiles as Arsenal train ahead of West Brom trip