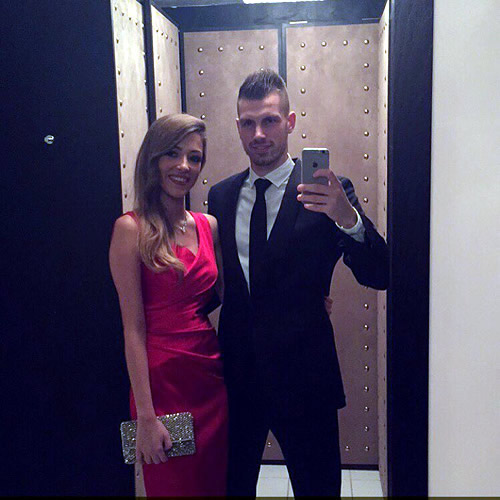 Morgan Schneiderlin looked in good spirits with his girlfriend as the couple prepared to attend a charity dinner on Sunday night.

The Manchester United midfielder was an unused substitute as Louis van Gaal’s men were held to a 1-1 draw by Leicester City at the King Power Stadium in the Premier League on Saturday evening.

And the 26-year-old posted the picture above of himself with his girlfriend Camille Sold, who began dating the Red Devils star earlier this year, on his personal Instagram account on Sunday evening.

The midfielder shared the picture above on the photo-sharing app on Sunday and wrote: “Ready for the unicef dinner with my love.”

Schneiderlin has been a regular fixture in United’s first team this season since arriving from Southampton in the summer transfer window.

The France international has made 11 Premier League appearances for the Red Devils so far this season, scoring one goal. He has also featured three times in the Champions League for Van Gaal’s side.

Piers Morgan reacts on Twitter to Arsenal’s draw at Norwich