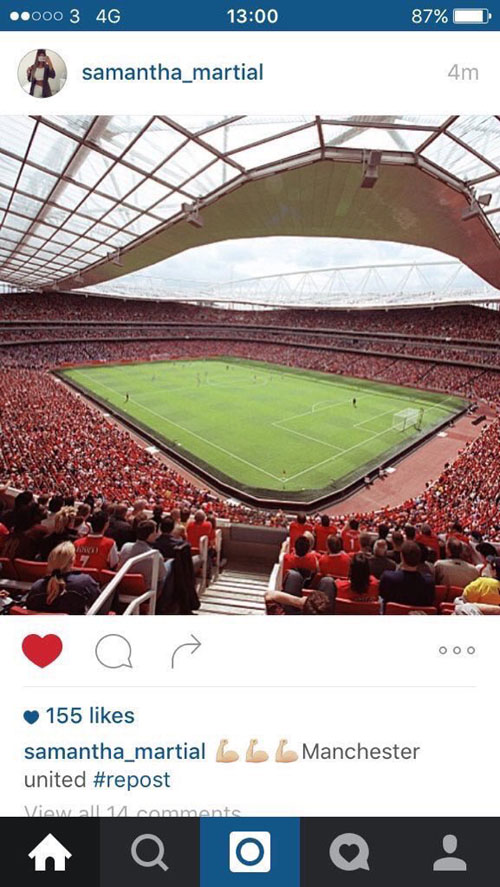 Samantha Martial has seen her Instagram popularity soar thanks to the performances of her husband.

However, Anthony Martial’s wife made a social media gaffe as Manchester United were 2-1 winners against Watford in Saturday’s early kick-off.

Looking to lend her support to United in the absence of her 19-year-old partner, the French beauty posted a snap of a stadium that she presumed to be Old Trafford.

In spite of watching United edge to a 2-1 victory over West Bromwich Albion earlier this month, she uploaded a snap of a packed Emirates Stadium, with plenty of her Twitter followers alerting her to the mistake.

But Martial’s missus was quick to correct her mistake and upload a snap of Old Trafford, including an cheeky apology in the caption for any easily offended United supporters.

Of course, United weren’t even playing at Old Trafford on Saturday after a 2-1 win at Vicarage Road thanks to Troy Deeney’s late own goal.

However, some football supporters were rather more scathing in their assessment of Martial’s partner.

Samantha Martial must be the dumbest wag on the planet. pic.twitter.com/DFNv7EzXv5

Martial was so embarrassed after the Arsenal game he told his wife we were the home team ffs. pic.twitter.com/pwfQf4LEPo