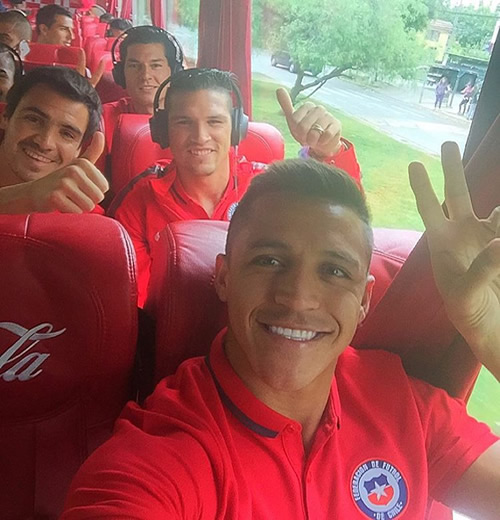 Alexis Sanchez looks to be in good spirits while on international duty with Chile despite fears about his fitness levels.

The Arsenal forward played the full 90 minutes as Chile were held to a 1-1 draw by Colombia on Friday night and could feature in Tuesday’s clash with Uruguay – despite picking up a minor calf strain.

Sanchez has been in fine form for Arsenal so far this season but his relentless schedule in recent weeks has prompted some concern over his fitness levels as the hectic festive fixture list approaches.

However, the 26-year-old looked in good spirits as he snapped a selfie on the Chile team bus on Monday morning.

Sanchez has played the full 90 minutes for Arsenal in his last three outings for Wenger’s men.

He will be expecting to feature when the north London side head to West Brom on Saturday afternoon.