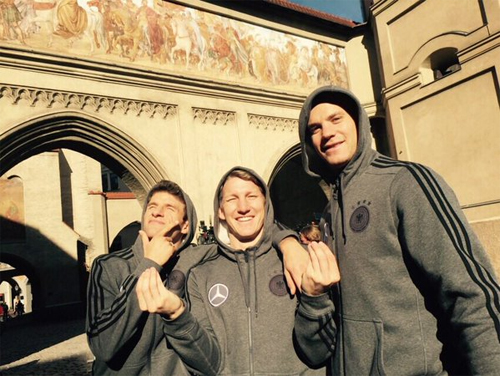 The Bayern Munich striker was linked with a move to Old Trafford in the summer transfer window, with Louis van Gaal reportedly keen to land the £50m-rated striker.

However, a move for Muller failed to materialise and the Red Devils signed Anthony Martial in a £36m deal from Ligue 1 side Monaco on the final day of the transfer window.

Unsurprisingly, the 20-time English champions are speculated to be ready to rekindle their interest in the 25-year-old striker given their goal-scoring struggles.

And United supporters will be hoping that Scweinsteiger was talking up a potential move to Old Trafford when the midfielder hung out with his Germany team-mates Muller and Manuel Neuer.

The Germany midfielder has scored 12 Premier League games following his £6.7m move to United from Bayern in the summer.