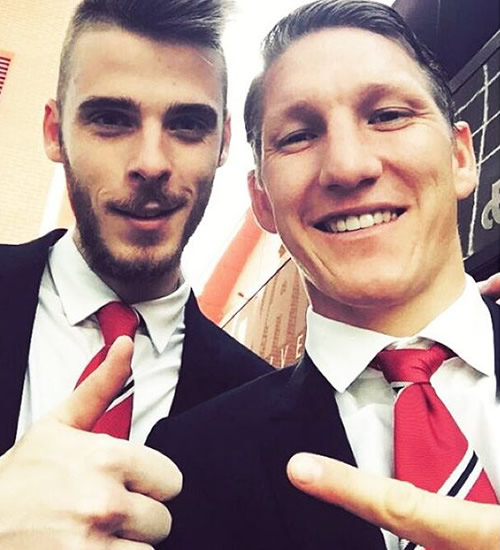 Bastian Schweinsteiger looked in good spirits as he posed for a selfie with David De Gea after the pair helped Manchester United secure a 2-0 win over West Bromwich Albion on Saturday afternoon.

De Gea celebrated his 25th birthday with three points as he kept a clean sheet to help Louis van Gaal’s men to victory.

Schweinsteiger posted the picture above of himself and De Gea on his personal Instagram account and wrote: “Today’s win is the perfect birthday gift. All the best, @d_degeaofficial

Jesse Lingard broke the deadlock when he bent a shot just inside the far post from just outside the penalty area.

Juan Mata then made the points secure for the home side in stoppage time when he struck home a penalty after Gareth McAuley brought down Anthony Martial in the box and was subsequently sent off.

The 18-year-old Cameron Borthwick-Jackson came on for his debut as Marcos Rojo went off with what appeared to be a minor injury.

The victory left United in fourth place in the Premier League table but just one point behind leaders City before Manuel Pellegrini’s men take on Aston Villa on Sunday.