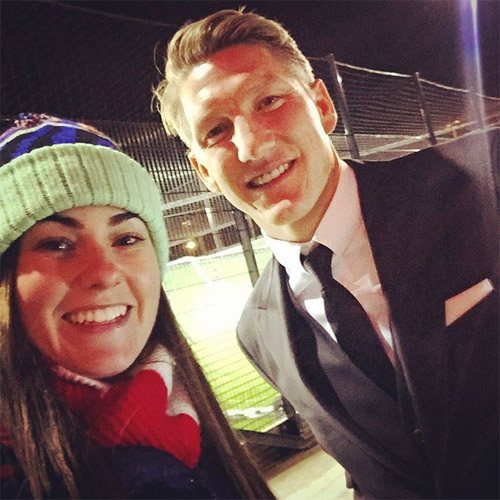 Bastian Schweinsteiger can do no wrong with the Manchester United supporters.

Schweinsteiger managed to score his first Red Devils goals in the Premier League on Saturday evening after the World Cup winner cancelled out Jamie Vardy’s opener to seal a 1-1 draw at King Power Stadium.

If that wasn’t enough, Schweinsteiger claimed via his Instagram page that he would happily have swapped his first Premier League goal for three points after a disappointing result with the Foxes.

Some United supporters demanded that the German replace Wayne Rooney as the club’s captain following his recent exploits.

And Schweisnteiger made one United fan’s night as he posed for a selfie ahead of their Unicef charity dinner on Sunday.

Schweinsteiger moved to United in a £6.7m deal from Bundesliga side Bayern Munich in the summer.