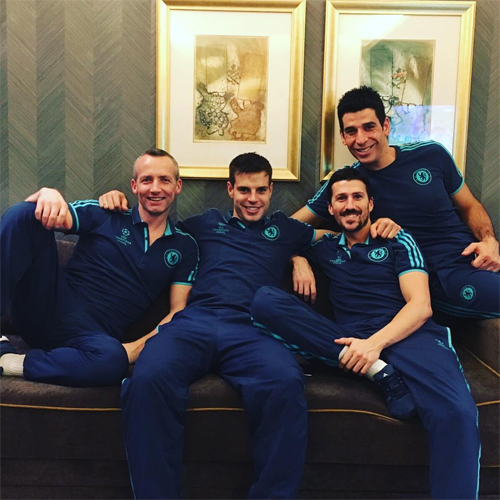 Cesar Azpilicueta was all smiles with the Chelsea medical staff after a 4-0 win at Maccabi Tel-Aviv.

The Blues eased to an emphatic win in the Champions League in Israel on Tuesday night to move to the top of Group G ahead of the visit of Porto on 9 December.

Gary Cahill broke the deadlock with a close-range finish in the first half before goals from Willian, Oscar and Kurt Zouma sealed three points.

Chelsea defender Azpilicueta was keen to praise the west London side’s unsung heroes as the Spain international posed for a snap after the win.

Azpilicueta uploaded the above photo and wrote the following caption on the photo-sharing app: “International medical staff #cfc”

Chelsea require a point from their final Champions League group game against Porto to reach the knockout phase.

The Blues make the trip to London rivals Tottenham Hotspur in their next Premier League fixture on Sunday afternoon.