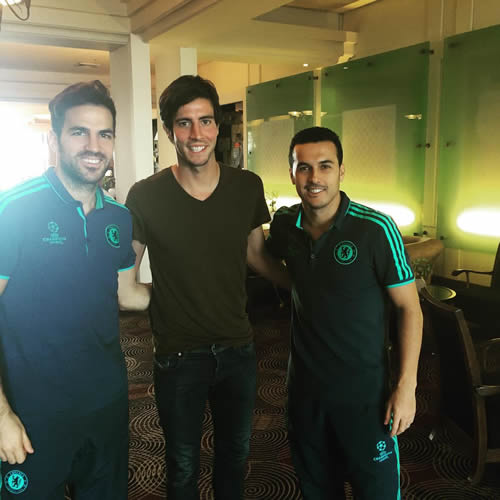 Cesc Fabregas was all smiles as he posed for a picture with Pedro Rodriguez and Marc Valiente ahead of Chelsea’s Champions League clash with Maccabi Tel-Aviv on Tuesday night.

Fabregas and Pedro are preparing to help Chelsea try to take a big step towards qualification for the last 16 of Europe’s elite club competition by beating the Israeli outfit on Tuesday.

Fabregas, Pedro and defender Valiente – who currently plays for Maccabi Haifa – all came through Barcelona’s youth system together.

And the trio were reunited on Tuesday morning ahead of the crunch Champions League clash.

Pedro – who signed for Chelsea from Barcelona in late August – shared the picture above on his personal Instagram account and wrote: “With @marki04 and @cescf4bregas !! Good memories!! Come on Chelsea!!”

Last season, when they won their group for the ninth time in their last 12 campaigns, Chelsea remained unbeaten but went out on away goals in the round of 16 with a 2-2 home draw against Paris Saint-Germain after the first leg ended 1-1 in France.