Photo: Chelsea star all smiles with Kaka ahead of Argentina clash 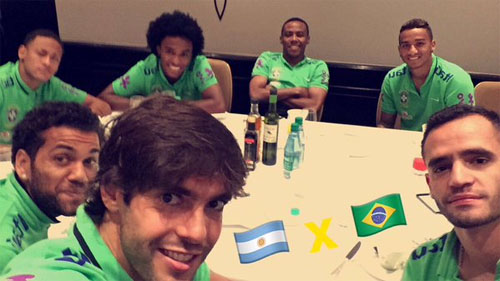 Willian was all smiles with Kaka and his Brazil team-mates ahead of their clash against Argentina on Friday night.

The Chelsea midfielder will be looking to forget his club woes as he attempts to help Dunga edge closer to 2018 World Cup.

Willian has been one of the defending Premier League champions more consistent players this season in an otherwise poor campaign for the Blues.

And the Chelsea winger posed with Kaka for a Brazil selfie ahead of their clash against Argentina at 00:00 GMT tonight.

Kaka wrote on his Instagram page: “If the rain allow us, today we have Argentina x Brazil”

The World Cup qualifier had to be rearranged for tonight after torrential prompted officials to postpone the game last night just an hour before kick-off.

The Brazilian playmaker has scored two times in 10 Premier League games for the defending English champions this season.

Willian has also made two assists in all competitions, although he was unable to prevent Chelsea from suffering a 1-0 loss to Stoke City last weekend.

Nigel Winterburn: Arsenal will still be challenging for title in April