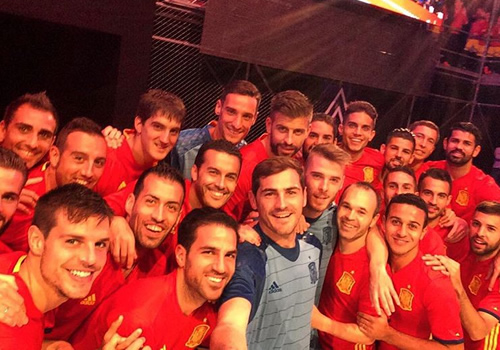 David De Gea looked in good spirits after linking up for international duty with Spain and being joined by the likes of Cesc Fabregas and Santi Cazorla.

The Manchester United goalkeeper is with his national team as they prepare for their forthcoming friendly clashes against England and Belgium.

De Gea was joined by a host of his team-mates for a huge selfie on Tuesday night as Spain showed off their new Adidas kit ahead of next summer’s Euro 2016 finals in France.

And the goalkeeper posted the picture above of himself with Premier League stars Cazorla and Fabregas, as well as Diego Costa and Cesar Azpilicueta, on his personal Instagram account.

De Gea shared the photo above on his personal Instagram account and wrote: “New kit, new challenges. We are ready to defend what’s ours. Do you want it?”