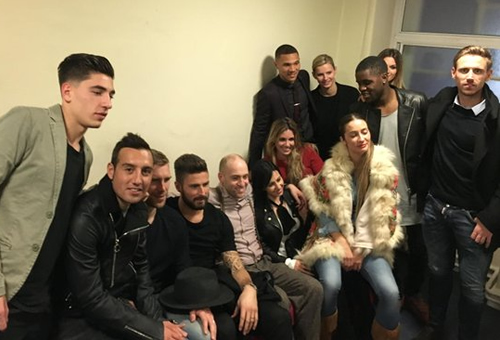 A host of Arsenal’s first-team stars were put under the spell of illusionist Derren Brown this week as they prepared for their Premier League clash with Norwich City on Sunday.

Santi Cazorla, Hector Bellerin, Olivier Giroud, Nacho Monreal, Kieran Gibbs and Joel Campbell were among the Gunners stars to have attended a show during his current ‘Miracle’ tour.

The Arsenal stars enjoyed the spectacle after beating Dinamo Zagreb 3-0 in the Champions League on Tuesday night as they kept their European hopes alive.

Brown shared the picture above of the Arsenal stars on his personal Twitter account, and conceded that his ‘Well done for beating Dinamo’ joke – a reference to fellow British magician Dynamo – did not go down well.

Brown shared the picture above on the social network and wrote: “W/ Arsenal last night after the show. My ‘Well done for beating Dinamo’ footie joke didn’t work at all. Am hopeless.”

Arsene Wenger’s side travel to Norwich City on Sunday afternoon as they look to bounce back from their disappointing 2-1 defeat at West Bromwich Albion last Saturday.

The Gunners are currently fourth in the table and two points behind leaders Leicester City.