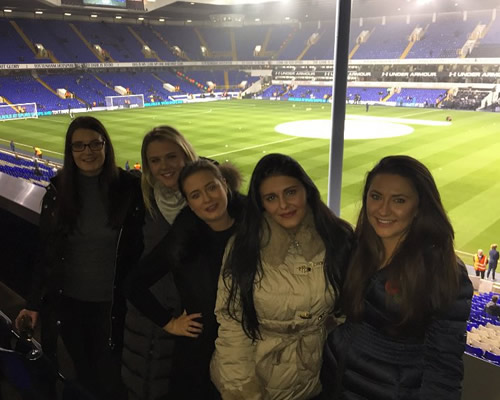 Harry Kane’s girlfriend looked in good spirits as she prepared to cheer the Tottenham striker on ahead of Monday night’s clash with Aston Villa at White Hart Lane.

The north London side were hosting the struggling Villains in north London as they looked to build on their 5-1 thrashing of Bournemouth in their most recent top-flight outing.

And Kane’s long-term partner Katie Goodland was all smiles with four of her friends prior to kick-off in north London.

Belgian midfielder Mousa Dembele gave Tottenham an early lead against the Birmingham outfit in the third minute during the Premier League clash in north London.

Tottenham headed into Monday night’s clash sixth in the Premier League table after taking 17 points from their opening 11 games.

Mauricio Pochettino’s men are unbeaten since their opening day defeat by Manchester United in the top flight.