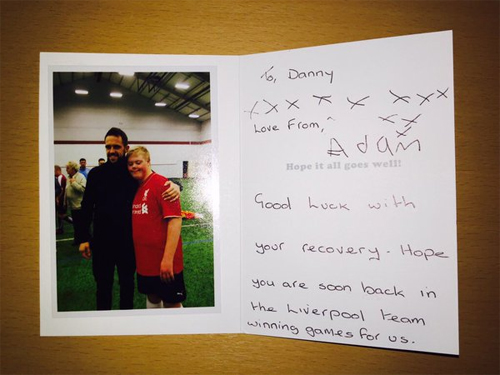 Danny Ings has taken to Instagram to show off a “lovely card” that the crocked Liverpool striker received from a Reds supporter.

The Liverpool striker ruptured his anterior cruciate ligament in October and Ings is expected to be sidelined for the remainder of the Premier League season.

Ings has netted twice in five top-flight games for the Merseyside outfit this term before the 23-year-old suffered an injury setback in training.

The Reds man has been using his free time to meet Burnley and Liverpool supporters involved in the England Under-21 international’s disability project.

And the summer signing was clearly moved when he received a thoughtful letter from Liverpool fan, Adam.

Lovely card from one of my boys at the disability project! Made my day 😊😊😊 pic.twitter.com/eqxcmsx6Df

Ings moved to Liverpool from Burnley on a free transfer in the summer window.

Ings has netted four times in 13 appearances for England’s Under-21 side.