Juan Mata is all smiles with Atletico Madrid midfielder Koke, who has been linked with a move to Chelsea 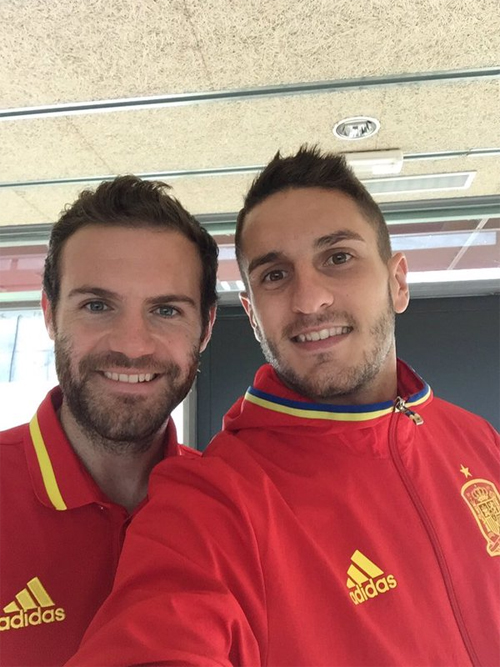 Juan Mata is a man who knows Chelsea inside and out.

The Spain international spent three-and-a-half seasons at Stamford Bridge before the 26-year-old move to Manchester United in a £37.1m deal in 2013 after falling out-of-favour under Jose Mourinho.

The Chelsea manager is a reported admirer of Atletico Madrid midfielder Koke, with the 23-year-old a possible candidate to improve the west London side’s struggling midfield this season.

Last month, Mourinho, whose side suffered a seventh defeat of the Premier League season at Stoke City on Saturday, was spotted at Spain’s game against Ukraine last month.

And Chelsea supporters will be hoping that Mata was talking up a potential move to his former club while on international duty on Wednesday, although given the defending champions’s current position, such a move could be a hard sell.

Koke posted the above snap and wrote on Twitter: “Morning shooting”

The Spain midfielder has scored one goal and has made one assist in eight La Liga appearances for Los Rojiblancos this season.