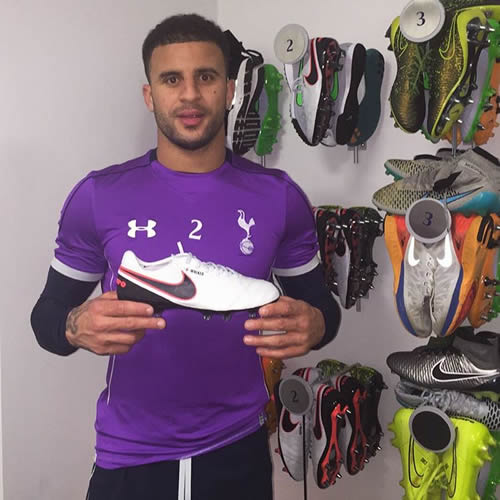 Kyle Walker is ready to test out his new boots for Tottenham Photo: Kyle Walker / Instagram

Kyle Walker has taken to social media to show off his latest pair of Nike football boots as he and his Tottenham Hotspur team-mates prepare for their Europa League clash with Qarabag on Thursday night.

Walker has been a regular fixture in the Tottenham first team this season and has started all 13 of Spurs’ Premier League games.

The England international scored one of Spurs’ four goals as they thrashed West Ham United at White Hart Lane on Sunday afternoon.

And the 25-year-old has taken to social media to show off his latest pair of boots ahead of Thursday’s Europa League clash.

Walker posted the picture above on his personal Instagram account and wrote: “Loving the new Tiempo 6 from @nikefootball – looking forward to putting them to good use! #niketiempo”

Spurs take on Qarabag looking to continue their recent good run of form after their 4-1 thrashing of West Ham United in the Premier League on Sunday afternoon.

Qarabag have an excellent record in Azerbaijan this season and they are unbeaten in five European home fixtures this term.