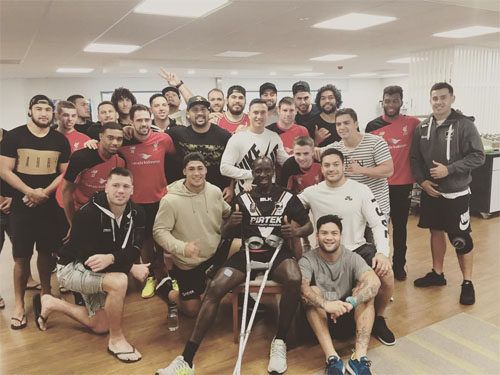 Mamadou Sakho was all smiles as the Liverpool defender and some of his team-mates posed with New Zealand’s rugby league squad.

The France international was left clutching his right knee after he landed awkward following a challenge with Palace winger Yannick Bolasie during the first half of Sunday’s 2-1 defeat at Anfield.

Sakho was replaced by Croatia centre-half Dejan Lovren as the Reds suffered their first defeat under Liverpool manager Jurgen Klopp after the 48-year-old took over the Merseyside outfit last month.

The former Paris Saint-Germain defender has remained at Melwood during the international break to recover from the knee problem as France face England at Wembley next Tueasday.

But Sakho was still in good spirits as he joined Daniel Sturridge and Danny Ings to mix with New Zealand’s rugby league stars.

The Liverpool centre-half has made seven Premier League appearances for the Merseyside outfit this season.

The France international moved to the five-time European champions in a £16m deal from PSG in the summer of 2013.