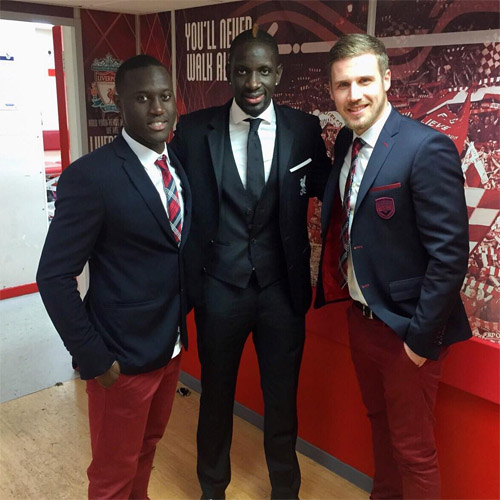 Mamadou Sakho was fraternising with the opposition on Thursday night after the injured Liverpool defender posed for a snap with Bordeaux duo Henri Saivet and Gregory Sertic.

The France international didn’t feature in Liverpool’s 2-1 victory over the Ligue 1 side at Anfield as the 25-year-old continues to recover from a knee injury.

However, Sakho was delighted to meet up with some old friends after the centre-half played with Saivet and Sertic during his time with France Under-21 squad.

The crocked Liverpool defender posted the above snap on his Instagram page and wrote the following caption: “Congratulations to the whole team!!”

Liverpool eased into the Europa League last 32 after James Milner and Christian Benteke cancelled out Bordeaux’s first-half opener at Anfield.

The Reds can secure three successive wins for the first time under new manager Jurgen Klopp if the Merseyside outfit can beat Norwich City at Anfield in the Premier League on Sunday afternoon.