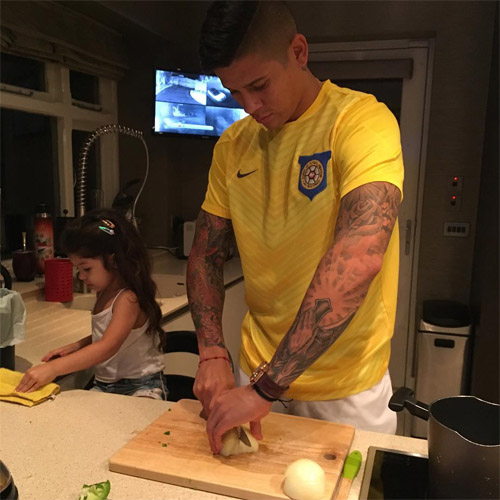 Marcos Rojo got his hands dirty in the kitchen ahead of Manchester United’s trip to Leicester City on Saturday evening.

The Argentina international is expected to feature in Louis van Gaal’s side as the Red Devils look to beat Leicester and secure top spot in the Premier League table.

Rojo was guilty of a rash tackle which led to Troy Deeney’s temporary equaliser in United’s 2-1 victory over Watford at Vicarage Road in the Premier League last weekend.

However, the former Sporting Lisbon man was working on his composure as he chopped an onion alongside his daughter on Friday night, presumably in preparation for a family dinner.

Rojo’s partner Eugenia Lusardo posted the above photo and wrote on her Instagram page: “Today my love cooks!!

Rojo has profited from Luke Shaw’s leg break in recent weeks after making the left-back spot his own.

However, the Argentina defender was a first-half substitute as he replaced Ander Herrera at Vicarage Road.

Rojo has made one assist in six Premier League games for the 20-time English champions this season.

Daniel Sturridge: This Liverpool star to blame for injury setback