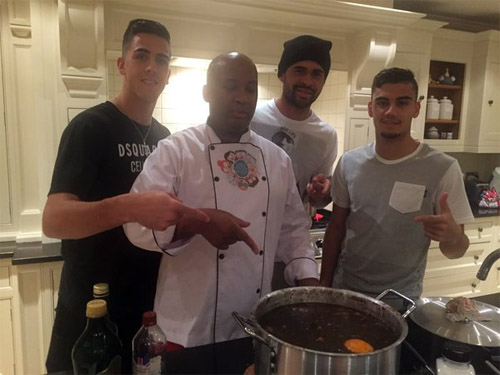 Andreas Pereira was all smiles as the Manchester United forward joined some Brazilian pals for dinner on Thursday night.

The Red Devils youngster was an unused substitute in United’s goalless draw with PSV Eindhoven in the Champions League at Old Trafford on Wednesday night.

Pereiera could line up against Premier League leaders Leicester City as the Red Devils make the trip to King Power Stadium on Saturday evening.

However, the Brazilian starlet wasn’t thinking about the prospect of facing the Foxes as he joined some of his pals to tuck into some Feijoada, a Brazilian meal.

Pereira also racked up 28 minutes in the Champions League after coming off the bench in a 2-1 victory over Wolfsburg at Old Trafford earlier this month.

The Red Devils are in second place in the Premier League table but just a point behind leaders Leicester.