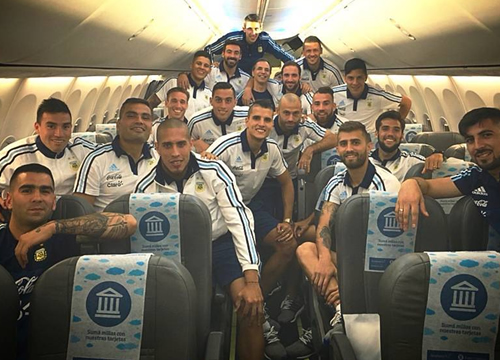 Marcos Rojo looked in good spirits as he posed for a picture with Ezequiel Lavezzi and a host of his other Argentina team-mates following their 1-0 victory over Colombia on Tuesday night.

The Manchester United defender joined his team-mates for a photo on the plane as they prepared to jet home and return to their clubs.

Lucas Biglia finished off a quick counter-attack to score Argentina’s goal in the first half as they claimed a World Cup qualifying victory.

And Rojo was all smiles as he posed for a picture with the likes of Lavezzi, Gonzalo Higuain and Tottenham star Erik Lamela.

Rojo posted the picture above on Instagram and wrote: “Heading home with the whole team and the three points !!!!!! Come on Argentina !!!!!”

Lavezzi has long been linked with a transfer to the Premier League, with both Arsenal and Manchester United touted as possible destinations for the forward during the summer.

Recent reports in the media claim that Barcelona have now entered the race to sign the forward from Paris Saint-Germain ahead of the January transfer window.

Manchester United take on Watford in the Premier League on Saturday afternoon.