Photo: Marcos Rojo makes most of day off after Man United win 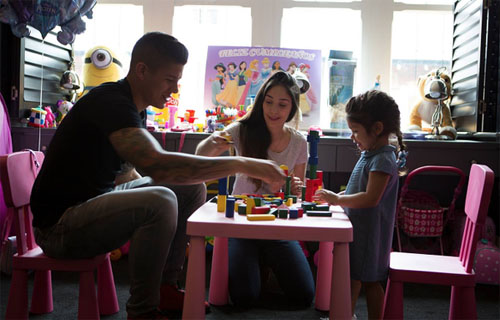 Marcos Rojo made the most of a day off from training as the Manchester United defender spent time with his young family.

Watford captain Troy Deeney dispatched the ensuing spot-kick after Netherlands international Memphis Depay had given the visitors a first-half lead.

However, Rojo’s blushes were spared after Bastian Schweinsteiger’s cross was bundled into the Watford net by Deeney.

But the South American wasn’t thinking about his near-fatal mistake as he relaxed with his wife and daughter on Sunday afternoon.

Rojo wrote on his Twitter account: “After a good victory, taking advantage of the day off! I love my family

Rojo has profited from Luke Shaw’s leg break in recent weeks after making the left-back spot his own.

However, the Argentina defender was a first-half substitute as he replaced Ander Herrera at Vicarage Road.

Rojo has made one assist in six Premier League games for the 20-time English champions this season.