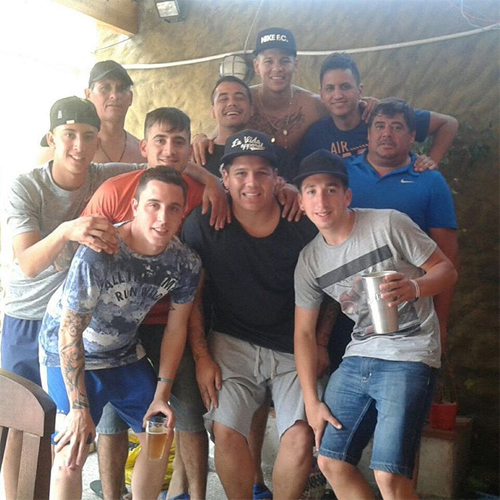 Marcos Rojo relaxed with his pals on Sunday after the Manchester United defender helped his side beat West Bromwich Albion at Old Trafford yesterday.

The 20-time English champions secured their first Premier League victory in three attempts thanks to goals from Jesse Lingard and Juan Mata at Old Trafford on Saturday afternoon.

Rojo continued his recent run at left-back in the absence of injured England international Luke Shaw, helping the Red Devils secure their third successive clean sheet in the Premier League.

The Argentina international wasted no time hooking up with his pals after the start of the international break for the United squad.

Rojo wrote on his Instagram page: “At home with all my friends and family that I have missed”

The Red Devils scored their first Premier League goal since 17 October after youngster Lingard netted a fine effort in the 52nd minute for the hosts.

Louis van Gaal’s side struggled to consolidate their victory as the United manager replaced Wayne Rooney for Ander Herrera in the second half against the Baggies.