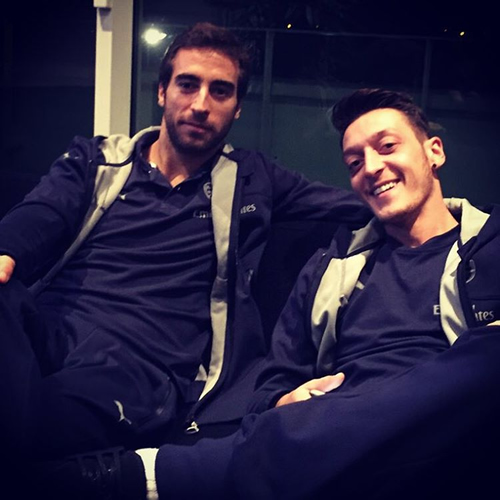 Mathieu Flamini and Mesut Ozil both looked relaxed as they prepared for Arsenal’s Premier League trip to West Bromwich Albion on Saturday afternoon.

The Gunners are in Birmingham as they prepare to return to top-flight action after the international break and look to get back to winning ways after their 1-1 draw with Tottenham a fortnight ago.

Ozil will be expecting to feature after not playing for Germany during the international break.

And the World Cup winner looked in good spirits alongside his team-mate as Arsene Wenger’s men gear up for their clash with the Baggies at The Hawthorns.

Flamini posted the picture above of the duo on his personal Instagram on Friday night and wrote: “With my mate @m10_official Getting ready for tomorrow’s game @arsenal”

Arsenal head into Saturday’s game in second place in the Premier League table and level on points with leaders Manchester City after 12 games of the season.

The north London side have the best away form in the Premier League this season, winning five of their six games.