Mesut Ozil enjoyed some downtime with his family on Thursday evening 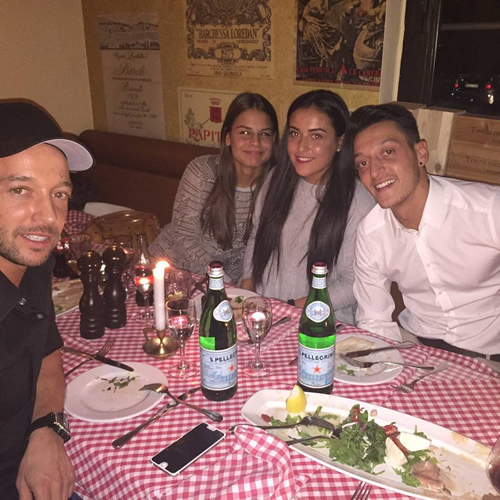 Mesut Ozil enjoyed some downtime away from the pitch on Thursday evening as he dined out with “La Familia”.

The Arsenal playmaker did not feature for Germany during the international break and should be fresh as the Gunners prepare for their Premier League trip to West Bromwich Albion on Saturday afternoon.

World Cup winner Ozil has been one of Arsenal’s top performers so far this season and has already registered 10 assists in the Premier League for Arsene Wenger’s men.

He set up Kieran Gibbs’ equaliser as Arsenal came from a goal down to beat local rivals Tottenham Hotspur in their most recent outing before the international break.

Arsenal head into Saturday’s clash at The Hawthorwns in second place in the Premier League table and level on points with leaders Manchester City after 12 games of the season.

Photo: Dele Alli wolfs down popcorn at the cinema with Tottenham duo