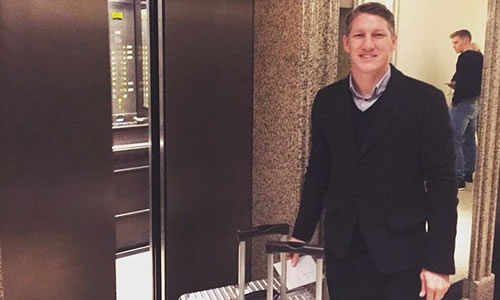 Bastian Schweinsteiger was all smiles as he checked in for international duty with Germany on Monday afternoon.

The World Cup winner looked in good spirits as he arrived at Germany’s team hotel in Munich as he and his team-mates begin their preparations for their forthcoming friendly clash against France in Paris on 13 November.

Joachim Low’s men then take on the Netherlands on home soil on 17 November in their final fixture of 2015.

Schweinsteiger posted the picture above on his personal Instagram account on Monday and wrote: “In München angekommen

Schweinsteiger played the full 90 minutes as he helped Manchester United record a 2-0 win over West Bromwich Albion at Old Trafford on Saturday afternoon.

The victory kept United in fourth place in the Premier League table and moved them to within two points of leaders Manchester City after 12 games of the new campaign.

Schweinsteiger has made 12 Premier League appearances for United since joining the club from Bayern Munich in the summer.

Cristiano Ronaldo: I have a great passion about Man United