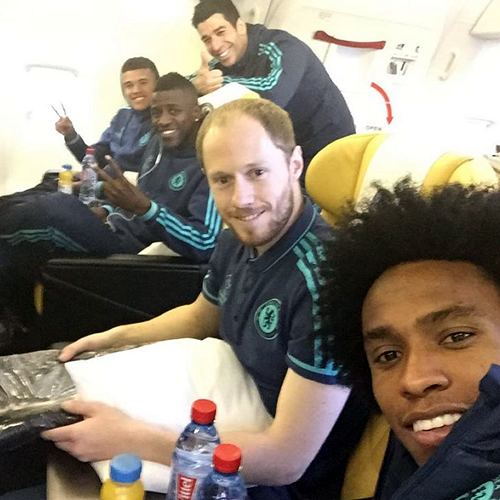 Willian is joined by Kenedy and Ramires on the flight to Israel Photo: Willian / Instagram

Kenedy looked to be in good spirits as he posed for a picture with Willian and Ramires as Chelsea jetted off to Israel ahead of their Champions League clash against Maccabi Tel-Aviv on Tuesday night.

The 19-year-old Kenedy, who signed for the Blues in August, played the full 90 minutes as Chelsea secured a 1-0 win over Norwich City at Stamford Bridge in the Premier League.

Willian also featured for most of the game as Jose Mourinho’s men finally returned to winning ways in the top flight after their seventh defeat of the season before the international break.

But there was no time for the Blues to put their feet up, as they jetted off to Israel after a light training session at Chelsea’s Cobham training ground on Sunday morning.

Chelsea’s win over Norwich left them in 15th place in the Premier League.