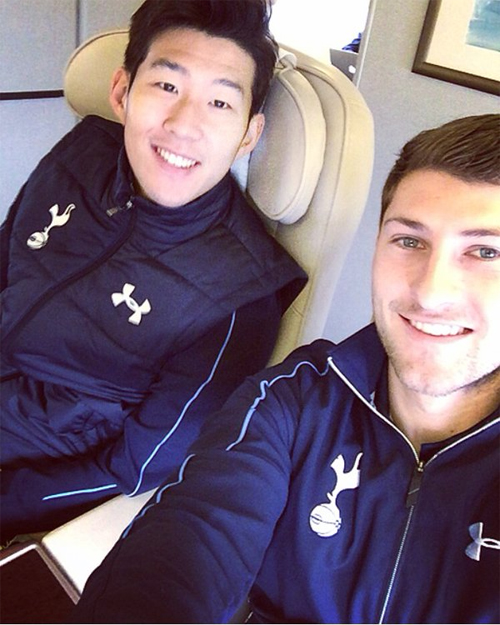 Ben Davies was all smiles with Tottenham signing Son Heung-min as Spurs jetted out to Azerbaijan on Wednesday morning.

Davies, meanwhile, was an unused substitute after falling behind England international Danny Rose in recent weeks.

However, the Welsh defender was all smiles with his South Korean team-mate ahead of their long flight to eastern Europe.

Me and Sonny ready for our trip to Azerbaijan, let's keep this momentum going!! ✈️ #COYS #BakuBound #EuropaLeague pic.twitter.com/3gOkRFLvPT

The 23-year-old forward has scored three goals and has made two assists in seven appearances in all competitions in an injury-hit start to life at White Hart Lane.

Son moved to north London side in a £22m deal from Bundesliga side Bayer Leverkusen in the summer transfer window.

• In ten games since Qarabağ entered 2015/16 Uefa Champions League qualifying, they have managed just eight goals and have only once scored more than one in a single match.

• Spurs are without a win in four European away games (D1 L3).

• This is Qarabağ’s second Uefa Europa League group stage campaign. They narrowly missed the cut for the round of 32 last season, having become the second Azeri side to make it to a major Uefa roup stage – after Neftçi PFK in 2012/13 – and the first to win a group stage game.

• In seven previous Uefa Cup and Uefa Europa League campaigns, Spurs have only once failed to reach the round of 32 – in 2011/12.

Spurs host Chelsea in their next Premier League game on Sunday afternoon.