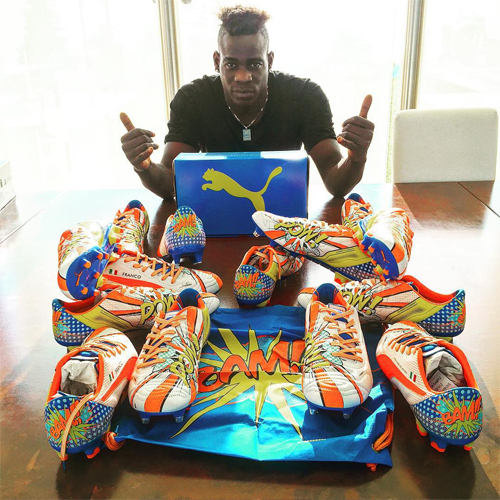 Mario Balotelli isn’t one to shy away from the spotlight.

And the on-loan Liverpool striker will certainly be in focus next time he takes to the football pitch after the Italy international received a consignment of ostentatious Puma boots.

Balotelli, who has so often been the pantomime villain during spells at Liverpool and Manchester City, took to Instagram to show off the comic-themed football boots.

Balotelli wrote on the photo-sharing app: “#evopower #foreverfaster #pumafootball I shouldn’t say it but this are ones of my favourites .. Can’t wait to be back in the pitch to score with these! Patience👊😍cartoon boots.. Idea for Pia❤️”

The Italian striker needs a helpful nudge in front of goal after having scored one goal in four appearances for Milan after he returned to the Serie A club on a season-long loan from the Reds.

Balotelli endured a miserable season at Anfield last term after he scored once in 16 Premier League games.

The Premier League winner moved to Liverpool in a £16m deal from Milan before he returned to the Rosaneri on a season-long loan.

The 25-year-old striker netted four times in 28 games in all competitions for Liverpool last season.