This is a very classy move 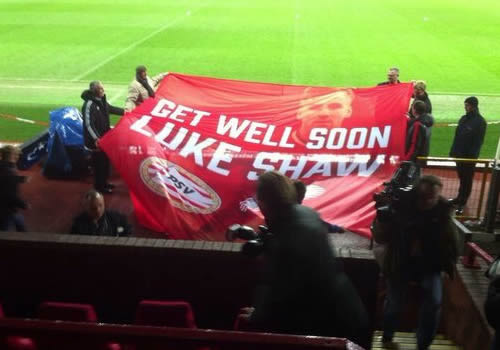 The banner PSV fans are planning to unveil on Wednesday Photo: Twitter / Raman7Paul

A group of PSV Eindhoven fans have shown their class by planning to unveil a banner featuring a get well soon message for Luke Shaw at Old Trafford on Wednesday night.

The defender suffered a broken leg during Manchester United’s 2-1 Champions League defeat by PSV back in September, ruling him out of action for the foreseeable future.

Shaw suffered the horror leg break during the fist half in a collision with Hector Moreno during the European clash and underwent surgery in the Netherlands.

And with PSV set to face United at Old Trafford in the return game on Wednesday night, the travelling supporters are planning a classy tribute to the left-back.

Louis van Gaal said on Tuesday that Shaw is set to undergo a scan later this week to assess how his recovery is going.

The defender has been walking without crutches in recent weeks as he continues his rehabilitation.