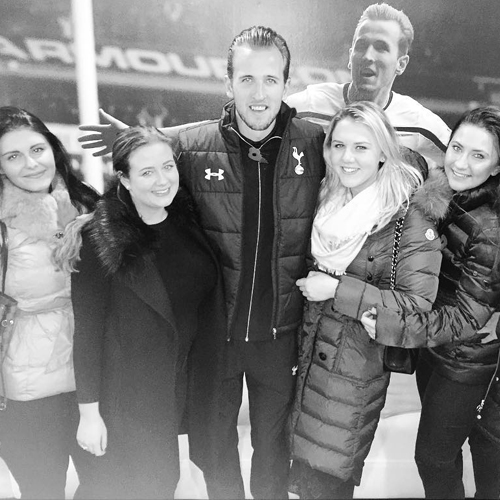 Harry Kane and his friends after 3-1 win Photo: Kate Gooders/Instagram

Harry Kane was all smiles with his girlfriend and their friends after he scored in Tottenham Hotspur’s 3-1 victory over Aston Villa on Monday night.

Belgium midfielder Moussa Demebele broke the deadlock in the third minute with his second goal in successive games before Dele Alli added a second before half-time.

And Kane restored Tottenham’s two-goal lead with a stoppage-time strike after Jordan Ayew had halved the deficit to ensure a nervy finish at White Hart Lane.

The Tottenham talisman posed with “Harry’s angels” after the comfortable win for Mauricio Pochettino’s men, with his girlfriend posting the above photo on her Instagram page.

Kane’s partner, Kate Gooders, wrote the following caption on the photo-sharing app: “All my favourites in one photo ☺️🌎❤️ #harrysangels”

The England striker has scored four goals in two Premier League games for the north London side.

PFA young player of the year Kane has netted five times in 11 games in the English top-flight this season.