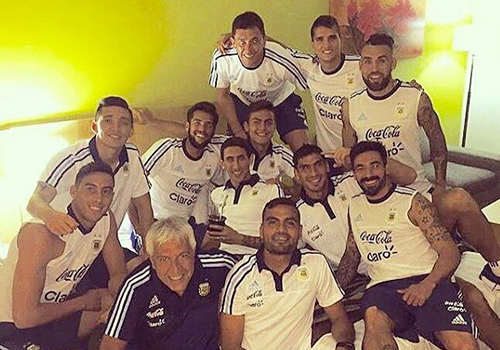 Erik Lamela looked in good spirits as he posed for a picture with reported Manchester United and Arsenal target Ezequiel Lavezzi and a host of his other Argentina team-mates on Monday night.

The Tottenham Hotspur playmaker is currently on international duty as they gear up for their World Cup qualifier against Colombia on Tuesday night.

Argentina were held to a 1-1 draw by Brazil in their most recent outing on Saturday – and Lamela looked to be in high spirits as he relaxed with the likes of Lavezzi and Nicolas Otamendi.

Lavezzi has long been linked with a transfer to the Premier League, with both Arsenal and Manchester United touted as possible destinations for the forward during the summer.

Recent reports in the media claim that Barcelona have now entered the race to sign the forward from Paris Saint-Germain ahead of the January transfer window.