Wayne Rooney is all smiles with Paul Pobga - so did he tell him to consider a move back to Manchester United? 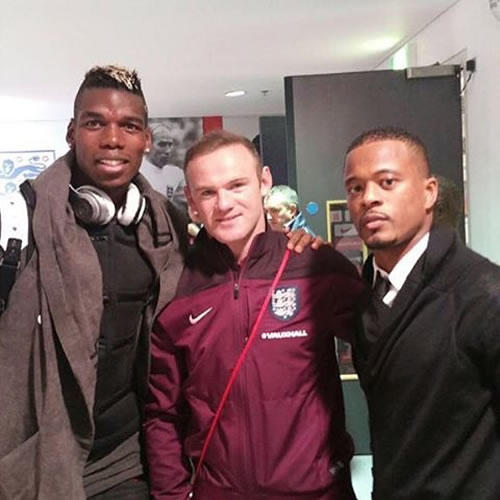 Wayne Rooney looked in good spirits as he posed for a picture with ex-Manchester United stars Paul Pogba and Patrice Evra after England’s friendly win over France on Tuesday night.

The England captain scored his side’s second goal as they secured a 2-0 victory at Wembley in their final international clash of the year.

Pogba has been regularly linked with a return to Manchester United in recent months following his departure from Old Trafford to Juventus on a free transfer back in 2012.

The France international has developed into one of the most highly-rated midfielders in Europe at the Serie A side.

And Rooney may have tried his hand at convincing Pogba to consider a move back to Old Trafford after Tuesday night’s game.

Rooney shared the picture above on his personal Instagram account and wrote: “Good catch up with old team mates last night

United return to Premier League action with a trip to Watford in the top flight on Saturday lunchtime.

Photo: Marcos Rojo thanks friends before jetting back to Man United