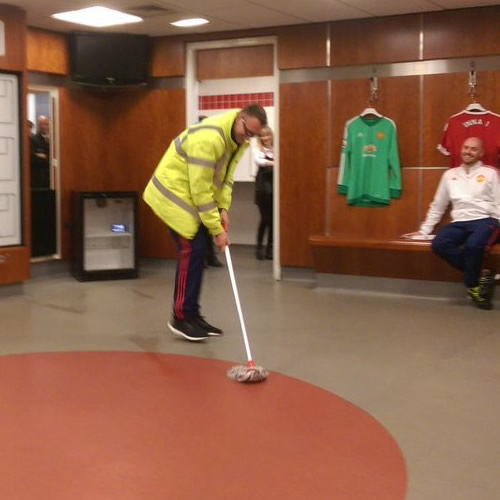 Phil Jones is well known for his ability to fill in in a number of positions on the pitch for Manchester United.

Now, it appears that the England international is proving himself as something of a utility man off it as well.

The 23-year-old defender was pictured by fans this week making the most of his new job as Old Trafford’s janitor.

Jones was pictured mopping up the dressing room floor and was clearly enjoying himself, too.

Still laughing at Phil Jones pretending to be the cleaner. Didn't even know it was him until he took the hi vis off. pic.twitter.com/ptClNxZ6I4

The defender will be hoping to feature when United return to Premier League action with a home clash against West Bromwich Albion at Old Trafford on Saturday afternoon.

The Red Devils head into the game looking to return to winning ways after their goalless draw at Crystal Palace last weekend.

Louis van Gaal’s men are currently fourth in the table and four points behind leaders Manchester City after 11 games of the new season.

Andy Gray: Why Arsenal have too much firepower for Tottenham