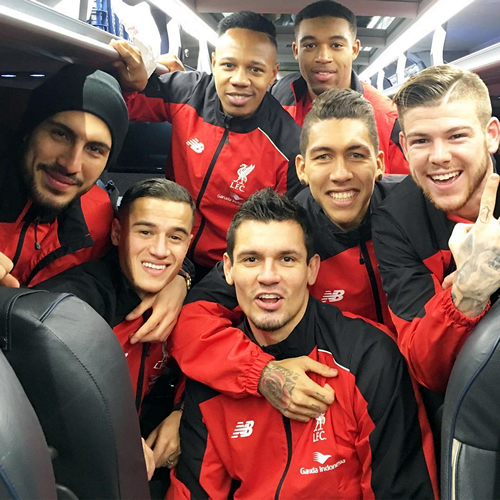 Roberto Firmino could not hide his delight after helping to fire Liverpool to a thumping 4-1 win over Manchester City in the Premier League on Saturday night.

The Reds took a seventh-minute lead after Eliaquim Mangala put the ball past his own goalkeeper Joe Hart at Etihad Stadium.

Liverpool doubled their lead thanks to Philippe Coutinho’s fourth goal in three games before Firmino added a third in the 32nd minute.

Although Sergio Aguero offered City some hope with a goal before half-time, Liverpool sealed three points thanks to Martin Skrtel’s late volley.

The win followed their last impressive away performance as Liverpool sealed a 3-1 win at Chelsea last month.

And Firmino was clearly thrilled to play his part in the victory as he was joined by Coutinho and a number of his other team-mates for a post-match snap on Liverpool’s team bus after the game.