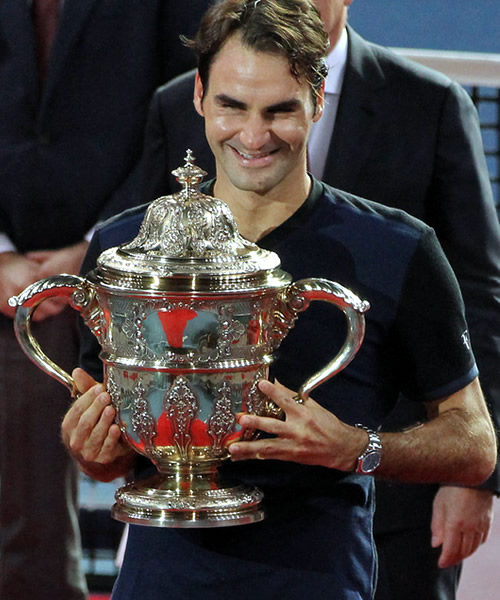 Hardly another man could get a look-in either in the Majors or in the rankings. From Federer’s first Grand Slam at Wimbledon in 2003 until Nadal won the US Open at the end of 2010, they accounted for 25 of 30 Majors and for most that span, they shared the top two spots in the rankings

Of course other great names have since broken through the Roger-and-Rafa glass ceiling, most impressively the super-Serb Novak Djokovic, who has now overtaken Nadal for the number of weeks at No1 and has overtaken Federer on the list of Masters title winners. He is also giving chase in the Majors, up to 10 and counting.

So dominant has Djokovic become that it is his name that now features in the two most played rivalries of all time—42 times against Federer, 45 against Nadal—and both match-ups have captured the imagination for their intensity. Yet for many, the most charismatic rivalry remains the one between the Federer and Nadal.

For all the facts and figures will never do justice to the synergy that has developed through more than a 100 sets of tennis and 33 matches between these two. Perhaps it is the contrasting looks, perhaps the contrasting styles of tennis—Federer the embodiment of Swiss cool, and with a game that melds elegance and touch with athletic footwork and rapier-like attack, and Nadal the fist-pumping powerhouse, drenched in sweat, one of the finest defence-turned-attackers and owner of a jack-hammer left-handed forehand.

The back story has been compelling, too: Nadal proved to be the nemesis of the Swiss, the man who, from their very first meeting in Miami in 2004, had the game play to expose Federer’s Achilles heel. Such that, as they readied to meet for the 34th time in the Swiss star’s home town, Nadal had beaten Federer 23 times over a period of 11 years, and 20 times in finals. Indeed it had been six matches and three and half years since Federer had last got the better of him.

Not that the shot in question, Federer’s much-admired one-handed backhand, was a particular weakness until Nadal came along. But in the face of the Spaniard’s lasso of a cross-court forehand wide and high above the left shoulder, Federer had to evolve, develop more power, chip and drive both cross-court and down the line—and he did just that with the help of a bigger racket and new coach, Stefan Edberg, at around the time he last played Nadal.

But since they met at the Australian Open in 2014, their rivalry has been on the back burner. Thus the Swiss Indoors this week counted itself very fortunate to stage the reunion—in the title match and in their first meeting on Swiss soil.

Both had big statements to make—especially so close the season’s climax at the World Tour Finals—and Federer had no doubts about the tactics he would face. Nadal’s game plan never varied, he said. The question was, could Federer’s new weapons—the bigger racket and the serve-and-volley maestro Edberg in his corner—break down those tactics?

It soon became clear that they could. Sure enough, Nadal opened with a serve to Federer’s backhand, and held the opening game, but Federer was hyper-aggressive from the start. After fending off a break point in the second game, he unleashed the SABR shot for the first time. It failed, but it threw down a marker. 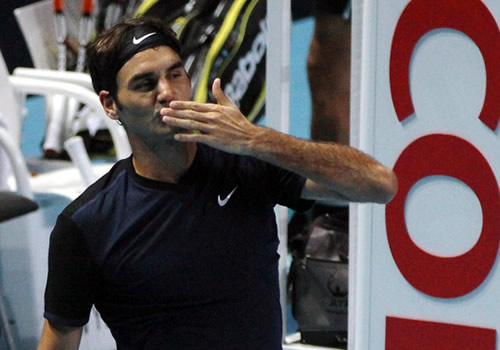 However the key factor was less Federer’s own serve and aggressive follow-up but what he could do with Nadal’s serve and forehand tactic. What he did was block with his backhand, angle it away with top-spin, fire it down the line deep and fast. One such block, followed in for a deft backhand volley winner, brought up break point, as did the next. One more backhand, a cross-court winner, opened the court for a forehand winner and the break.

The crowd went into overdrive. They did so again when Federer survived a break point in the sixth game. He unleashed the SABR again, and again failed, but with Nadal serving at 3-5, that blocked backhand return worked a treat again, Nadal double faulted and it was 0-40. Federer broke for the second time, 6-3: Cue ecstatic uproar.

But this was Nadal, and more than once this week he had come back from a set down to win in three. Not that it looked as though he would get a chance at the start of the second set: Federer looked strong, calm and ruthless to open with a love hold: Two serve and volleys, one ace, one forehand down the line, four winners.

And when Nadal called for strapping to his right knee, as he had yesterday, this looked like an uphill task for the Spaniard. He even faced a break point in the sixth game, but come the ninth, he was on the rampage. Federer held with a couple of aces, but on his next serve, Nadal ripped through the court to break, and produced his best service game of the match, closing the set out to love with a smash, 7-5.

Both were impregnable at the start of the third. Then Nadal fought off a break point for 2-2 before Federer too came under pressure in the seventh. With the match on a knife-edge it was not Federer’s net skills that made the decisive break but a powerful baseline rally to drew a Nadal error.

Federer still had to focus: Nadal whipped a forehand cross-court winner to go 30-30, and then an over-ruled ace from the Swiss was replayed: even the officials were feeling the pressure.

But the Swiss maintained his cool for two more points to seal set, match and title, 6-3, and St Jakobshalle erupted to celebrate Federer’s seventh in Basel, the 88th of his career—and he could not have been happier as he took questions from the media with the grand gilded trophy at his feet.

“Clearly was a big match, big occasion, probably more for me than for him. But was probably my best victory here in Basel considering everything that I’ve done throughout my career here. After all the finals we’ve played, to have him here in Basel is amazing for the crowd and me personally. To come through and win was very special… a very special day.”

But what of those tactics, and the changes he made at the back end of 2013 when things had taken a dip in his resume?

“I definitely had the right game play with Severin today. We talked about it at length what I should do and what I shouldn’t do. So happy to see that everything we did talk about was exactly as we wanted. I think the racket has helped me for sure, as well, in terms of coming over the backhand a bit easier. I’ve had better backhand days and he’s had better forehand days, but over all I think the match was played at a high quality—it was entertaining and exciting for both of us.”

Now he heads to Paris with high confidence—“I think the body’s got used to match-play again after all these weeks of not enough matches”—and then to London to try and make it seven victories there as well.

For Federer, then, records keep coming, but so do the challenges.